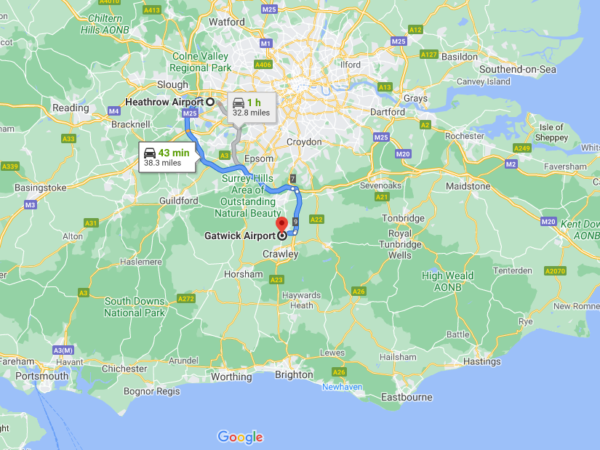 Gatwick to Heathrow Airport Transfers services you don’t have to worry about comfort and convenience. We provide a wide range of taxi services that you can choose from. All our services are designed with comfort, convenience, and safety.  We work hard to provide you with luxurious and  reliable travel.

As a result of the COVID-19 pandemic, we have taken extra measures to avoid the transmission of infection by cleaning and disinfecting our vehicles before and after each transfer. As safety and hygiene have become more crucial than ever, we also check the health of our drivers regularly. As the pandemic is still on the rise, we also work towards ensuring all our customers and drivers maintain and follow current social distancing norms.

For your convenience, you can now book your ride with us directly from our website and we provide flexible cancellations. With years of experience, our services are known for a polite and humble approach. Our drivers are experienced and reliable, and understand that your safety and security are of utmost importance. We maintain many kinds of cars for your preference. In any case, if you are doubtful, you can contact us via mail or a call.

Your ride in detail

Gatwick and Heathrow are two of the most important airports in the United Kingdom. When planning to travel from Gatwick to Heathrow, you will find more than one option for modes of travel. However, for various reasons, it is recommended that you use a private cab or taxi service for the fastest travel between Gatwick and Heathrow.

Previously booked private cars with our service have the advantage that you ride at cheaper rates than the cars readily available at the airport.

Two motorways connect the two airports, Gatwick and Heathrow. The route from Gatwick to Heathrow is about 45 miles, where both National Express and other private vehicles run all the time.

The time it will take you from Gatwick to Heathrow

With our private services, the route journey will take you somewhere around 60 minutes without any traffic delays. However, with traffic congestion, you should expect a journey to be around 75-80 minutes. During the weekdays, the times between 6:30am-10am and 3:30pm-7pm are when the traffic congestion is the highest.Traffic jams can be expected during Sunday evenings as well.

Cost of our services

Compared to other travel routes, the standard fare between Gatwick and Heathrow can be a little high. With our services, however, you can expect affordable and reasonable prices along with great offers and deals as well.

All of our services, including hygiene and other safety measures, are included in the fare.

Heathrow – At a glance

Heathrow Airport, once called London Airport, is the busiest airport in Europe by passenger traffic. This public airport is located in Hillington, Greater London, and is owned by Heathrow Airport Holdings. Over 80 airplanes fly to 185 destinations around the world from Heathrow Airport. The highest standards of security can be expected at Heathrow.

Heathrow – A look back at the history

Heathrow Airport has quite a rich history that dates back to the year 1930. It all started with a British aero engineer and aircraft builder Richard Fairey paying £15,000 for a 150-acre plot. This plot was used to build a private airport for testing and assembling aircraft. It was then named Fairey’s Great West Aerodrome, which went on to become what we call now Heathrow International Airport.

The same land later, was one of the requisitioned lands by the Government during World War II, to build RAF Heston, a different kind of base for troop-carrying aircraft. As the war was ending and the airbase was not needed anymore, the ownership was handed over to the Air Ministry as London’s civil airport. This was on the very first day of 1946.

The first aircraft to ever take off from Heathrow was Starlight, which is a converted Lancaster bomber. In the year 1966, the airport was named Heathrow Airport as previously it was called London Airport. Over the years, Heathrow has gone through tremendous changes in its operations, services, designs, and the number of passengers, and by 2006 it has handled around 1 billion passengers on over 14 million flights. In the year 2016, Heathrow celebrated its 70th anniversary.

There are no reviews yet.